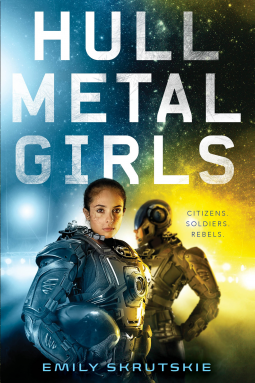 Aisha Un-Haad would do anything for her family. When her brother contracts a plague, she knows her janitor’s salary isn’t enough to fund his treatment. So she volunteers to become a Scela, a mechanically enhanced soldier sworn to protect and serve the governing body of the Fleet, the collective of starships they call home. If Aisha can survive the harrowing modifications and earn an elite place in the Scela ranks, she may be able to save her brother.

Key Tanaka awakens in a Scela body with only hazy memories of her life before. She knows she’s from the privileged end of the Fleet, but she has no recollection of why she chose to give up a life of luxury to become a hulking cyborg soldier. If she can make it through the training, she might have a shot at recovering her missing past.

In a unit of new recruits vying for top placement, Aisha’s and Key’s paths collide, and the two must learn to work together–a tall order for girls from opposite ends of the Fleet. But a rebellion is stirring, pitting those who yearn for independence from the Fleet against a government struggling to maintian unity.

With violence brewing and dark secrets surfacing, Aisha and Key find themselves questioning their loyalties. They will have to put aside their differences, though, if they want to keep humanity from tearing itself apart.

My review: Compared to The Abyss Surrounds Us — this wasn’t a go-to read like the first one of her books that I read. I try not to compare books but sometimes it’s really hard not to do since I was hyped up about her previous work. I was hoping for the same feeling as I read this but it wasn’t there.

It’s still an interesting read to go into but not something I had imagined it should/would be.

Downloaded from Netgalley for free in exchange for an honest review.